TGIF columns are in order by date from the most recent.

Scroll down to search or read more

TO WRITE a startlingly original newspaper column, you’ve got to copy others unashamedly and, in 1999, I stole a great idea from the Miami Herald’s Robert Steinback who, every January, wrote a column making predictions for the coming year and assessing the accuracy of his predictions from the year before.

Robert’s seer-man-ing was serious, because he lived in what was the world’s leading liberal democracy until President Soprano turned it into a criminal enterprise wannabe dictatorship. But I live here. Some of my predictions, then, are meant to make you laugh, while others would make anyone with any sense weep, the eternal Trinidadian conundrum being distinguishing the fantasy from the reality.
Since 2011, I have stunned readers with the accuracy of the previous year’s first prediction, as you will now see:
Read more

Don’t Look Up… Or Back

THE MOST ironic thing about a film intended as a satire – the Netflix megastar disaster set-in-the-stars tragicomedy, Don’t Look Up – is that it won’t be taken seriously by the people who need most to hear its message. They will be laughing all the way to the mortuary. The comedy will subsume the tragedy whole, like the e coli in a bad doubles, and the viewer-who-will-not-see will have no idea that what he’s consumed until he feels its full effect. He will notice the fan only after that stuff has hit it.

The second most ironic thing about the movie is that a film intended to unify its viewers around a critically important theme – unity in the face of imminent existential threat – has already split the audience as to the film’s own worth, both as message and as movie. The none-so-blind will dismiss the film’s polemic with the old Frank Capra line, “If you want to send a message, go to Western Union” and the attentive viewer weighing the film’s worth qua film will have a handful of “on the other hands”. Halfway through its runtime, a couple that began happily watching Don’t Look Up together might be quarrelling over whether the movie is a masterpiece or a piece of something else. For a production so slick and star-studded to end up with a score of only 50/100 on metacritic.com, there had to be as widespread a disagreement within families as there was amongst critics. 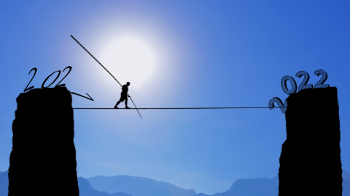 OLD YEAR’S Day and Y’Boy starting the last day of the year same way he’s start every day and the same way he will start the first day of the new year, God willing and hangover permitting: with a long, brisk walk in the cane fields of St Peter. (In Trinidad, is the Savannah and the Botanical Gardens, whereby the ghost of Anthony Harford Past must be now very Present.)

The sky blue-blue-blue, like Muddy Waters on a Saturday night and visibility so sharp it could almost cut your eye…but Y’Boy still can’t see where it is we going, with covid running wild and democracy running scared, and dotish people feeling they smart saying no to vaccine and thing.
Y’Boy know that, in Bajan cane fields, time does just drop away. You walk out your own gate, houses all round, car passing, neighbour giving you “Riiiight” – but, as you reach the first cane field, you start to leave the present day. Radio noise gone. Engine reverb softening as the cane thickening. By the time you reach the fourth cane field, you gone back three centuries.
And is just you.
And the memory of the land around you.